Robot Restaurants: How a Restaurant Robot Can Improve Your Business

Restaurant Robots…robot restaurants? Sounds like something from science fiction, right?

Well, what sounds like science fiction is actually a science fact: robot restaurants are transforming the dining experience, and the dawn of the future of food service is beginning to emerge.

As inflation continues to rise and patrons begin tightening their purse strings – food and hospitality companies have found themselves facing numerous challenges that look set to continue into 2023.

What is certain is that the future of food production is uncertain, as sustainability concerns continue to surmount. Businesses are struggling to remain competitive as consumer demands become more sophisticated, and supply chain issues and labour shortages continue to exacerbate the situation.

It is no wonder then, that the food industry has been investing billions of dollars in food tech companies, including food R&D, personalized nutrition, online grocers, ‘ghost’ kitchens, food waste and sustainability projects, and last but not least- restaurant robots. 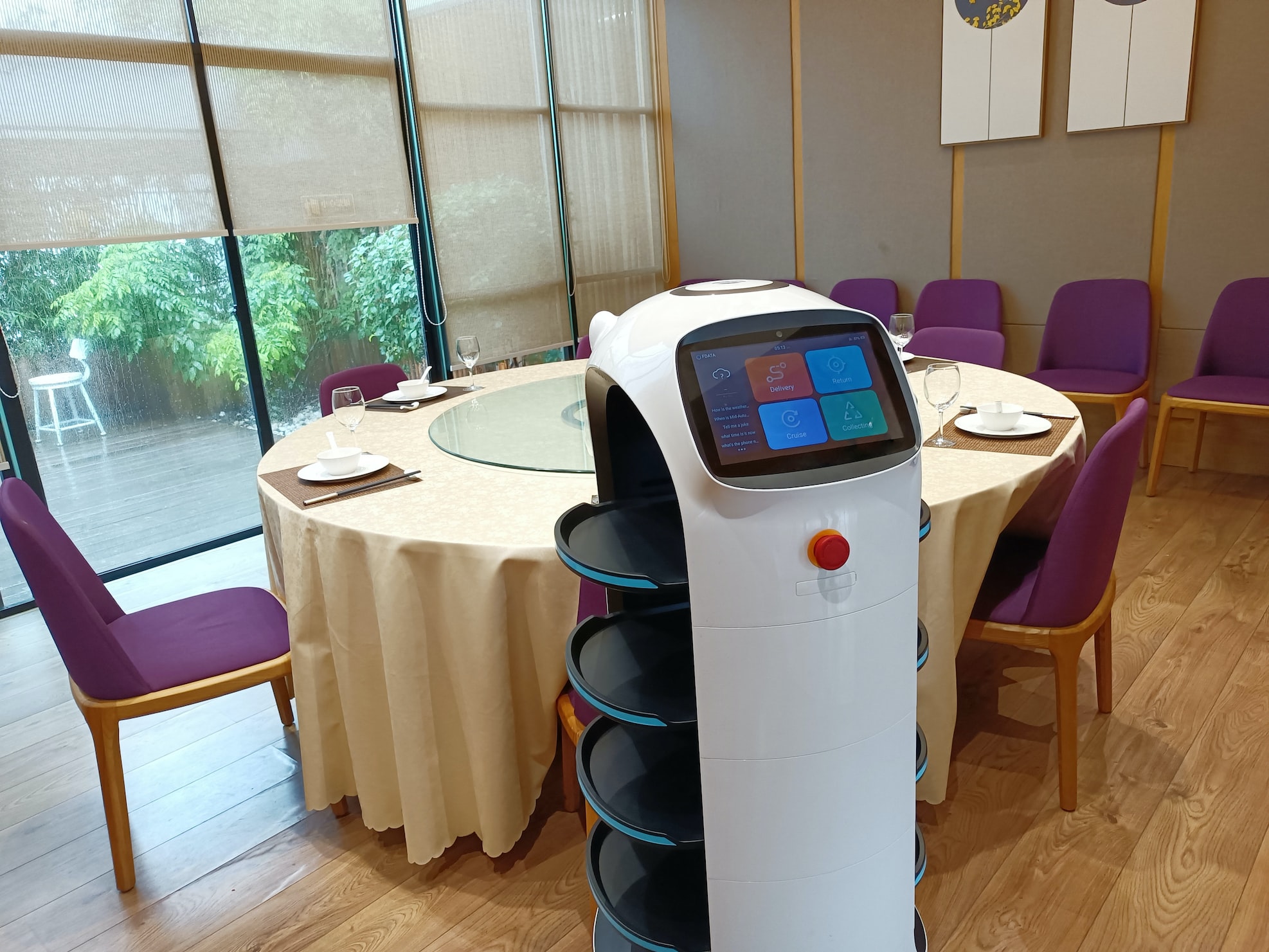 What are Restaurant Robots?

Restaurant Robots or ‘Food Service Robots’ look set to change the food service game for good, and SavourEat is pioneering the field.

Not only are these robots easy to acquire, but they also give the food and hospitality businesses a competitive edge, offering a unique and personalized dining experience for customers.

Known as ‘fast-casual’ dining, Boston-based restaurant Spyce was the world’s first restaurant to start filling its vacancies with robots. The project was the brainchild of four MIT students backed by Michelin star Chef Daniel Boulud and a small team of human staff that work alongside robot chefs that prepare all the food ready for guests to collect from kiosks.

This powerful idea has seen robotically controlled restaurants spring up across the USA and beyond with robot chefs now working in restaurants in Japan, China, Iran, Argentina, Germany, and India, with SavourEat operating within the very core of this movement installing robots in kitchens across Israel.

So what is the deal? What is it about robot chefs that is causing such a stir? (pun intended).

Stirring the Pot with a Restaurant Robot

Ever since their humble beginnings in the 1950s when American inventor and businessman George Devol made a breakthrough with the world’s first mechanical arm, service robots have been a phenomenon treated with awe and intrigue and have successfully proven their utility – and cost-saving abilities.

The idea of service robots is not new, with origins stretching as far back as ancient Greece. However, modern robots first appeared regularly in factories, pioneered by General Motors. Since then, the number of robots in factories outnumber people, and their numbers have continued to climb exponentially throughout the previous 4 decades.

Combined with additional software advancements, service robots have continued to evolve and put to task performing jobs that are typically dirty, repetitive, dangerous or boring – basically, jobs where attracting and retaining human talent is often a struggle.

So, taking robots out of the factory and into the kitchen is not a giant leap, so curious investors have been digging deep into their pockets to fund such projects and are being handsomely rewarded for their confidence with high ROIs.

Depending on the setting, service robots or ‘automatons’ polarize the public. They tend to be considered the norm, a spectacle, and in some cases objects of suspicion. Alas, despite some concerns that ‘robots are taking our jobs’ it appears that the evolution and utilization of service robots show no sign of slowing down. This is perhaps because robots are not replacing humans. Instead, they are augmenting the workforce, filling vacancies that no longer appeal to human workers, and creating more jobs.

Even if the myth that robots are replacing the human workforce was proven to be true, it remains that given the increased pace of modern life and higher expectations from customers, businesses and human workers alone cannot realistically fill consumer demands or remain competitive without a little robotic power.

How Your Business Can Benefit

From production lines to home care – service robots are coming for the food industry next – and here is how your business can benefit from The Rise of the Machines.

The most obvious and immediate benefit of ‘hiring’ robot workers is the cost savings. These savings go beyond the simplicity of reduced wage payouts.

Of course, there is the upfront cost of purchasing the robot but this is nothing compared to the yearly salary you must provide for a human throughout their working life.

And that’s only if hiring staff was that simple. Long gone are the days of graduates entering and retiring in the same job. The truth is that the food industry experiences one of the highest rates of staff turnover than most other industries.

Most assume that it is because of poor working conditions, low pay, and bad benefits, and in some cases, this is probably true. However, the core issue that no chain restaurant CEO or decision-maker can resolve is that food service attracts a lot of school and college leavers who quickly move on to other jobs.

The cost to firms having to replace and retrain new staff every year is staggering and steadily increasing, with Australia spending $23,000 on hiring and training for every new staff member – this is more than the yearly wage of a minimum earner in the US.

Robots eradicate that problem. Even with regular maintenance and repairs, you will soon see your outgoings shrink as you begin onboarding mechanical staff.

Your customers expect perfection, and you want to deliver no less. But as the old saying goes,‘to err is to be human’ – but this philosophy does not apply to robots.

Robots do not get stressed, nor do they get sick, distracted, or go AWOL during lunch breaks. They don’t even have lunch breaks! Orders are made exactly, and all specifications and food requirements are met every time. Customers with food allergies and intolerances are better protected.

You will not only be known for your delicious food but also for your great service and reliability.

Many aspects of food service can be mundane and repetitive, especially fast food which is prepared easily with little technical challenge.

Boredom evaporates a workforce almost as quickly as poor pay. Robots do not get bored. They can be programmed to multitask with 0 mistakes, and are usually faster than their human counterparts.

They won’t complain that they are stuck on onion-chopping duties for the third weekend in a row. Nor will they call in an hour before their shift is about to start to tell you they are not coming back. Ever.

With the exception of general wear and tear over the years, robots will not let you down.

Introducing Robots to Your Restaurant Now, be prepared for a lot of questions when you first announce the plan to implement robots to your restaurant team. Unless you are starting a new restaurant from scratch with robots already in place, it is normal and expected that your human coworkers will be excited, surprised or in some cases concerned, to start this new venture with you.

You will have to ensure that process owners are identified and everyone understands how their role will be impacted by the change.

The key to implementing robotics into any aspect of a business is to evaluate your goals and expected outcomes. Once you have those realistically established, work backward to achieve them.

Technological implementation works better when it is introduced in phases. Not only does this allow you to weed out any errors in the process early on, but it is a smoother transition for the human staff that will be working alongside the machines.

Start small, and scale from there.

Train your staff to use the machines and correctly maintain them. Doing so has benefits for you, the employer, and your staff.

Upskilling your staff will prepare them for the future job market, which they will appreciate. People with industry knowledge and technical skill will be in high demand.

What’s more, since the robots will significantly reduce your outgoings you will be better positioned to scale employee pay as their skills develop. Also, you could offer better benefits to new talent, creating a pool of career-focused staff.

As employee satisfaction increases, turnover decreases – along with the cost. Everybody wins.

Reaching your ultimate robot restaurant goals takes time and continuous innovation. Here at SavourEats, we have world-class automation specialists that are experts in robotics for business.

We have a shared passion for supporting the food industry to be the best it can be through the utilization of technology, and your business is no exception.

Are you ready to make headlines with your revolutionary robot restaurant? Get in touch with us today to begin your transformation with robotic automation.